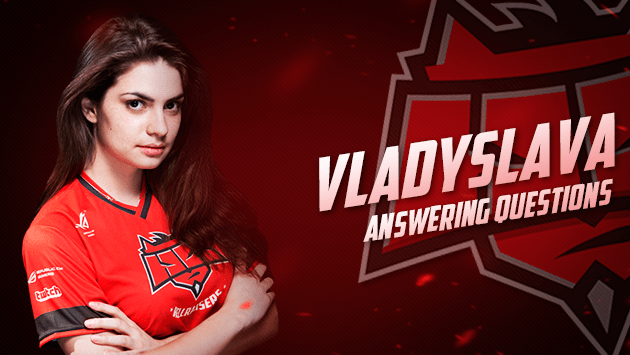 Like the Olympics were restricted for women in Ancient Greece, the nowadays esports is considered to be a man’s world. No games impose bans on their players’ gender; still, just 19% of people involved in cybersport are women. What is more, most of 19 % are not engaged in the actual gaming. As a rule, females show excellent performance as team managers, marketing specialists, and psychologists.

You should also know that the quota of female in cybersport is growing every year. By seeing empowering examples like Vladyslava Zakhliebina, young women can realize that making their career in esports is not different from any other niche.

In her mid 20’s, Vladyslava is known as a successful player, manager, reporter, streamer, blogger, host, and brand ambassador. Even though she still looks exotic within the community dominated by her male colleagues, no one can doubt her natural talent and professional skills.

Vlada grew up in Ukraine. Sport has always been her hobby: 12 years of athletic career resulted in especial strength, resilience, and courage. After entering university, she could not imagine her life without a regular adrenaline rush. Thus, trying herself in esports seemed like an option.

The first game Vlada played was Counter-Strike. She even practiced for getting on board of csc.Arena female team but didn’t get there due to the lack of experience at the beginning. The first failure didn’t stop her from trying, and she kept working on her skills to become a professional player.

“In general, playing in a female team is a complicated thing. Usually, ladies are involved in a bunch of other activities like university, work, and family. In Ukraine, full-time women players were a big exception. This is why I was grateful to receive an invitation to csc.Arena years later”, Vlada says.

Vlada’s first job in esport was connected with media. She was perfect in multitasking, which gave her a chance to combine obtaining two degrees, playing, and working as a reporter. “It’s an image of a typical Ukrainian girl, who can do all at once. But this “all” never included cybersport”, giggles Vlada.

Vlada’s professional skills contributed to HellRaisers becoming a top CS team in the world. Vlada worked as a reporter, manager, host, and content manager for StarLadder. Today, she represents the Razer brand, which allows her to travel all around the planet. If you want to schedule an interview with this young lady – you better notify her in advance.

“All the girls are dreaming to see the Eifel’s Tower when in Paris. My first trip to France was slightly different: in Paris, I witnessed the ESWC tournament organized by CyberFight. Trust me, if I had a choice, I would visit ESWC again.”

Finally, Vlada is contributing to the developing segment of inclusive cybersport. Like many other female icons, she states that sport has not gender and both women and men should be represented on the esports arena.

Esports is a particular type of sports, which doesn’t imply physical excellence. Therefore, this industry welcomes women players as well as the male ones. The ever-growing sector offers multiple opportunities for both players and non-players. So what’s wrong with the gender balance? The principle “no girls allowed” is a stereotype, which is still, unfortunately, regulates our mentality. Many female players report cyberbullying and thus come up with the male nicknames to avoid tense situations in chats.

Online harassment is not the only obstacle: some of the women are not able to choose gaming as their hobby for the reason of social pressure. We still live in the world of pink and blue without the ability to freely choose sides as children.

One of the socially excepted solutions is holding the women-only-tournaments and organizing the ladies’ teams. However, this strategy emphasizes the gender separation even more and even leads to the creation of the fake teams just for keeping up to the competition requirements.

Talking about successful women in esports is a different technique. Such inspirational stories like the one of Vlada prove the presence of both genders in esport. Her example encourages to celebrate diversity in the industry of online games as she entered there not like a woman but like a skilled specialist.